With concept to success 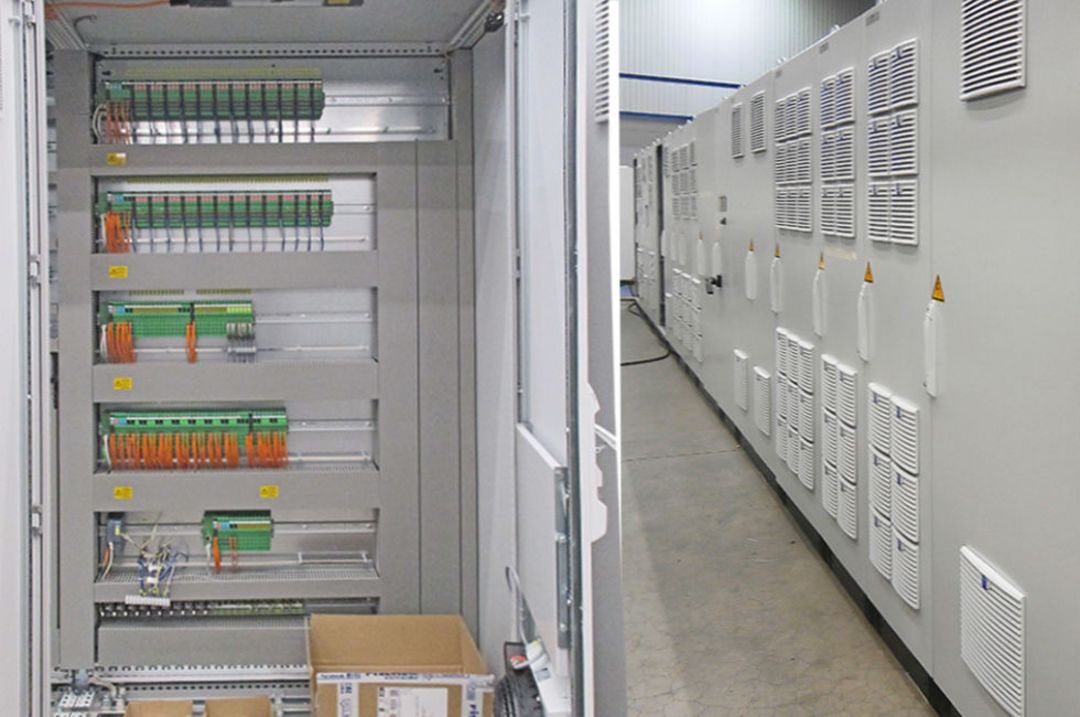 Few opportunities are better suited for the modernization of a plant than a planned shutdown. However, it becomes challenging when the shutdown is only three weeks and the modification falls into the “comprehensive” category. This was the case with the electrical modernization of the ContiRoll® operated by the Siempelkamp customer EGGER Barony Ltd. in Auchinleck, Scotland. This example shows that even under such conditions we manage to deliver an optimal result.

ContiRoll® A0533:
Status quo and review

The press delivered in 1997 is a particle board line of the 6th ContiRoll® generation. The installed automation technology corresponded to the Siempelkamp standard for this press series or for this year of manufacture. Starting in 2014, the first modernization measures in the area of automation technology were implemented: The existing ATR process visualization and the ATR recipe input were replaced with current Windows-based visualization licenses. However, defects, components that were no longer available and only limited availability of service personnel increasingly led to malfunctions and breakdowns. Therefore, EGGER decided to carry out further modernization measures. The first review followed in 2016. It was clear that due to the fast development cycles in the automation world, the systems delivered in 1997 no longer corresponded to the state of the art. In addition, it was no longer possible to replace individual components or systems due to incompatible interfaces. Thus, a coherent concept for the electrical modernization of the plant had to be developed. The challenge was to find the optimal modernization option for the annual shutdown of the plant for maintenance purposes for about a time period limited to only three weeks.

In close cooperation with those responsible at EGGER Barony, our modernization experts drew up a comprehensive catalogue of measures. On the basis of experience from other projects, they developed the schedule for this together with EGGER Barony. The goal: restart on day 17 after the system had been shut down. The prerequisite for such a tight schedule was the detailed preparation of the individual steps, which the two project teams mastered brilliantly. The concept provided for the following measures:

Visualization and recipe input of 2014 will continue to be used, the existing Intouch application will be adapted to the newly delivered control systems.

The VME system will be disassembled and the function of the pressure position control will be shifted to a new SPC system. The HIMA safety control system and the associated hydraulic valves, including the sensors, will also be disassembled and all the necessary safety interlocks for the hydraulics and the hot platen will be integrated into the SPC system. S5 controllers will be replaced with new Siemens S7 controllers. The control functions for the forming line area, i.e. matformers, pre-press and forming belt as well as the control functions for the press area with heating control, belt tracking and lubrication will be transferred from the VME software to the corresponding Siemens S7 controllers. The fieldbus system will be changed from Profibus to the Profinet system. Excluded are the push-button boxes in forming line and press area: Since the replacement of these boxes would exceed the specified downtime, the boxes are still connected to the S7 control system via Profibus. The connection of the boxes is carried out via Siemens Proxy modules which make it possible to connect the obsolete Profibus modules to the new Profinet. Thus, EGGER can replace the old push-button boxes with boxes using the latest Siemens technology as required and on their own.

The RC-cabinets with Phoenix-ST modules will be delivered new and installed in a specially created control room. The same modules for the pressure position control area will be replaced with new Phoenix Inline modules with Profinet connection. For the control functions of forming and press line the Siemens ET200SP modules with Profinet connection and S7 control connection will be used. The terminal boxes in the hydraulic area will also be delivered new and will be mounted outside the hot area of the press. The advantage: the new RC-cabinets and terminal boxes are assembled, wired and pre-tested before the system is shut down making commissioning easier and shorter.

In the infeed area of the press from frame 2 to frame 6, the hydraulic control will be changed from 2-fold to 3-fold pressure systems. This ensures a better and more even hydraulic pressure distribution in the press infeed.

A kick-off meeting initiated the modification. During this meeting the participants went through all the details again and named the final teams for project management, coordination of installation, personnel and supervision.

All deliveries and pre-installations were completed on time and the commissioning was also carried out on schedule. The start of production was then a precision landing which was completed by the joint acceptance of the complete modification. The key to success: the good cooperation of all those involved and the completion of important milestones in the course of the project.

The modernization ensures the long-term availability of electrical spare parts and qualified personnel, which is why EGGER will benefit from high plant availability for years to come.